These little ones are different souvenier dolls, so I will squeeze them in here with the Airline dolls:

I have only seen these variants so far.

These next little air stewardesses were issued from the airline companies, well at least that is what I think.

I believe you bought them on board the air planes. The body is similar to Daisy's, same mould, but the head is different from Daisy's. Most of them are maybe made by Optimum? 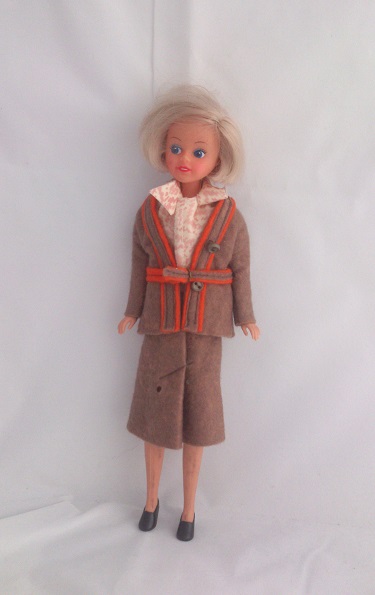 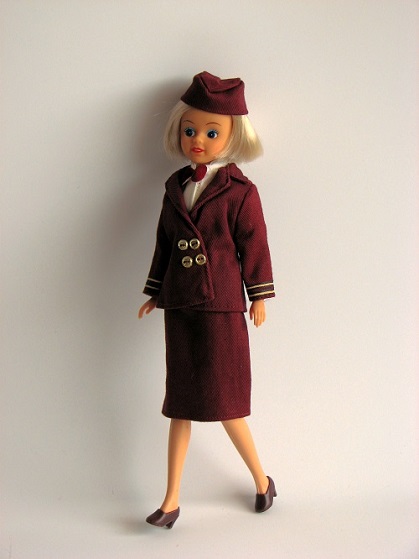 These two lovebirds have evaded me so many times!

They are from Northwest Airlines, Though the company is no more having been merged into Delta Airlines, This pair was made when it still existed. The are just like the TWA dolls.

This one is from Singapore Airlines, but I'm not sure if it is the right doll or not... I think her head has been replaced... 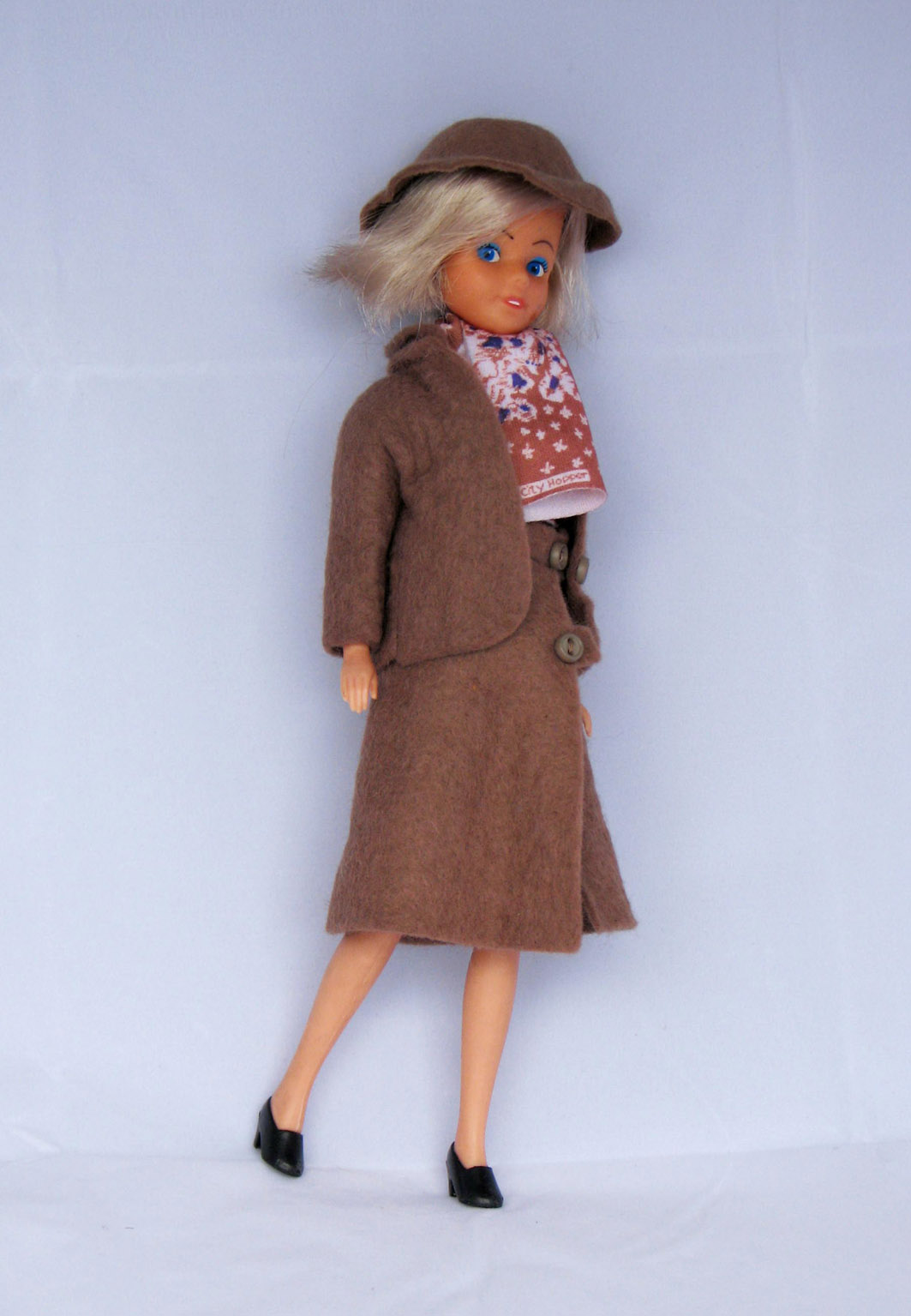 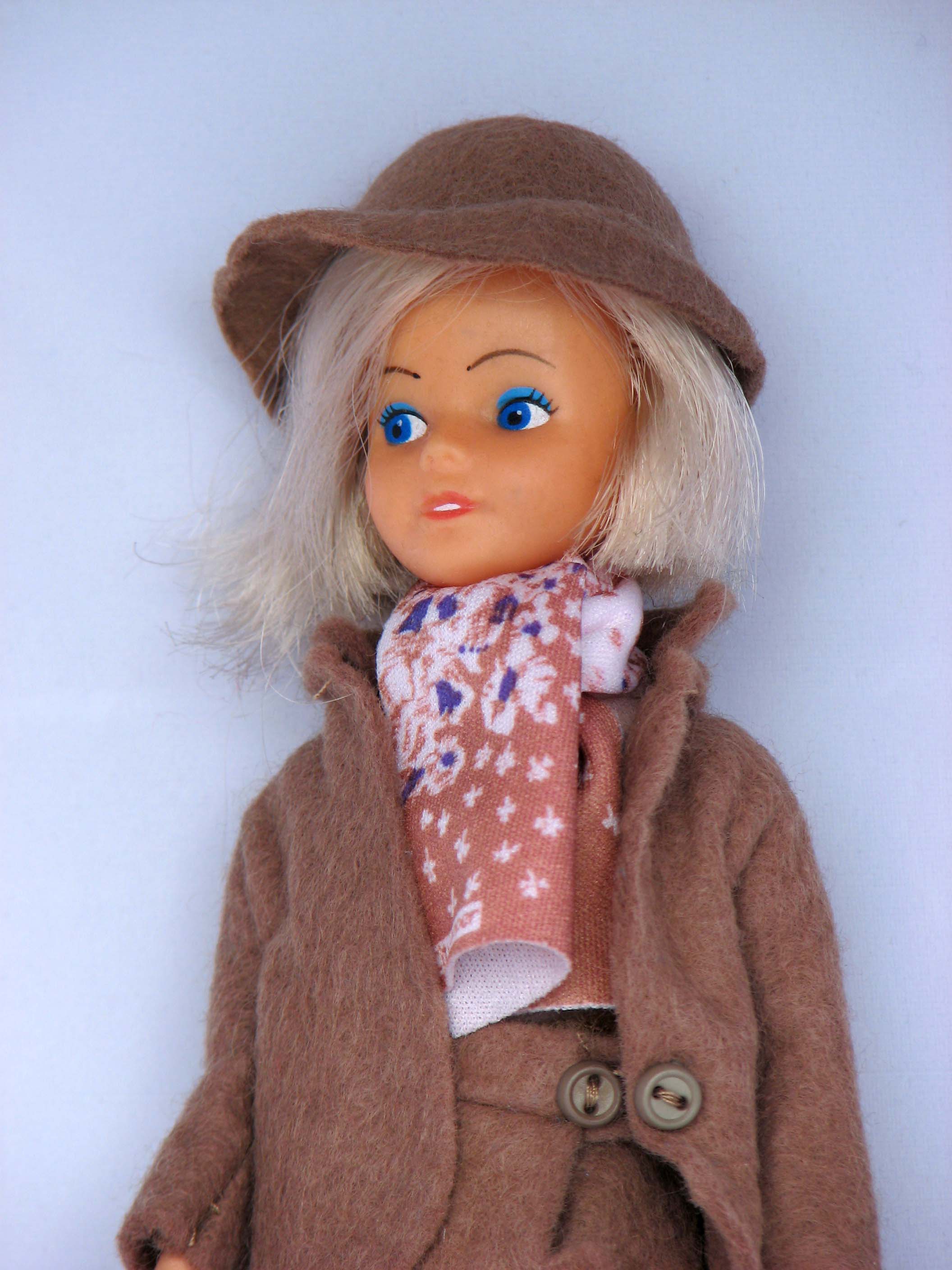 NLM CityHopper operated under its own name until 1992. The airline flew mostly Dutch domestic flights and short-haul European flights in and around its base of Amsterdam Airport Schiphol.

In 1992, NLM CityHopper and another Dutch airline, Netherlines, were both acquired by KLM and rebranded as KLM Cityhopper.

KLM cityhopper was founded in April 1991 and is the regional subsidiary of KLM Royal Dutch Airlines  part of the Air France-KLM Group. The Dutch KLM air stewardess (Dutch: Koninklijke Luchtvaart Maatschappij, pronounced [ˌkɔnɪŋkləkə ˌlʏxtfaːrt maːtsxɑˈpɛi̯]), the sweetest expression on her face... And the same doll as the one from CP air.

KLM (Air France-KLM) is the oldest airline still operating under its original name. It was founded in 1919 and in 2003 they merged with Air France keeping the original name. 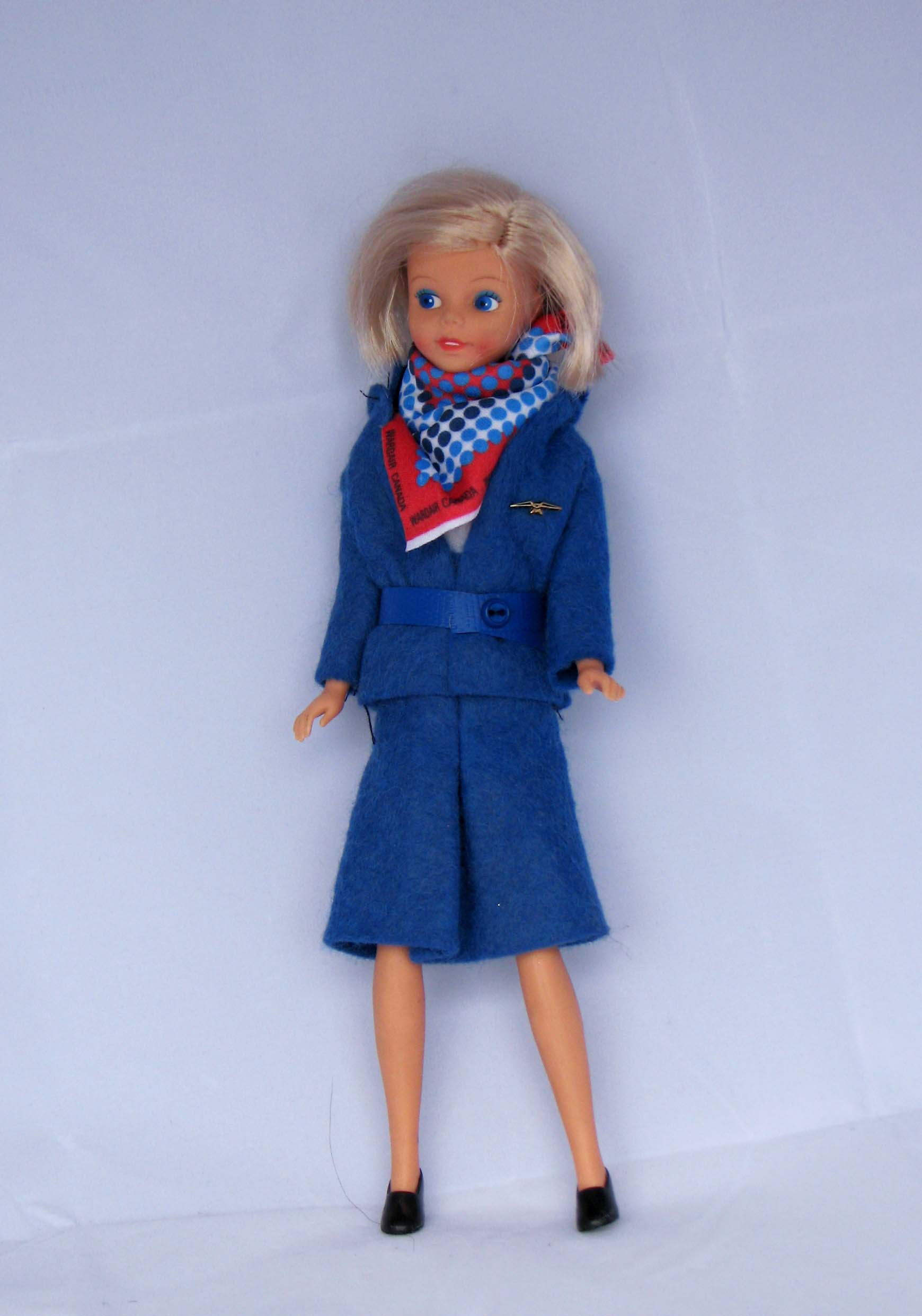 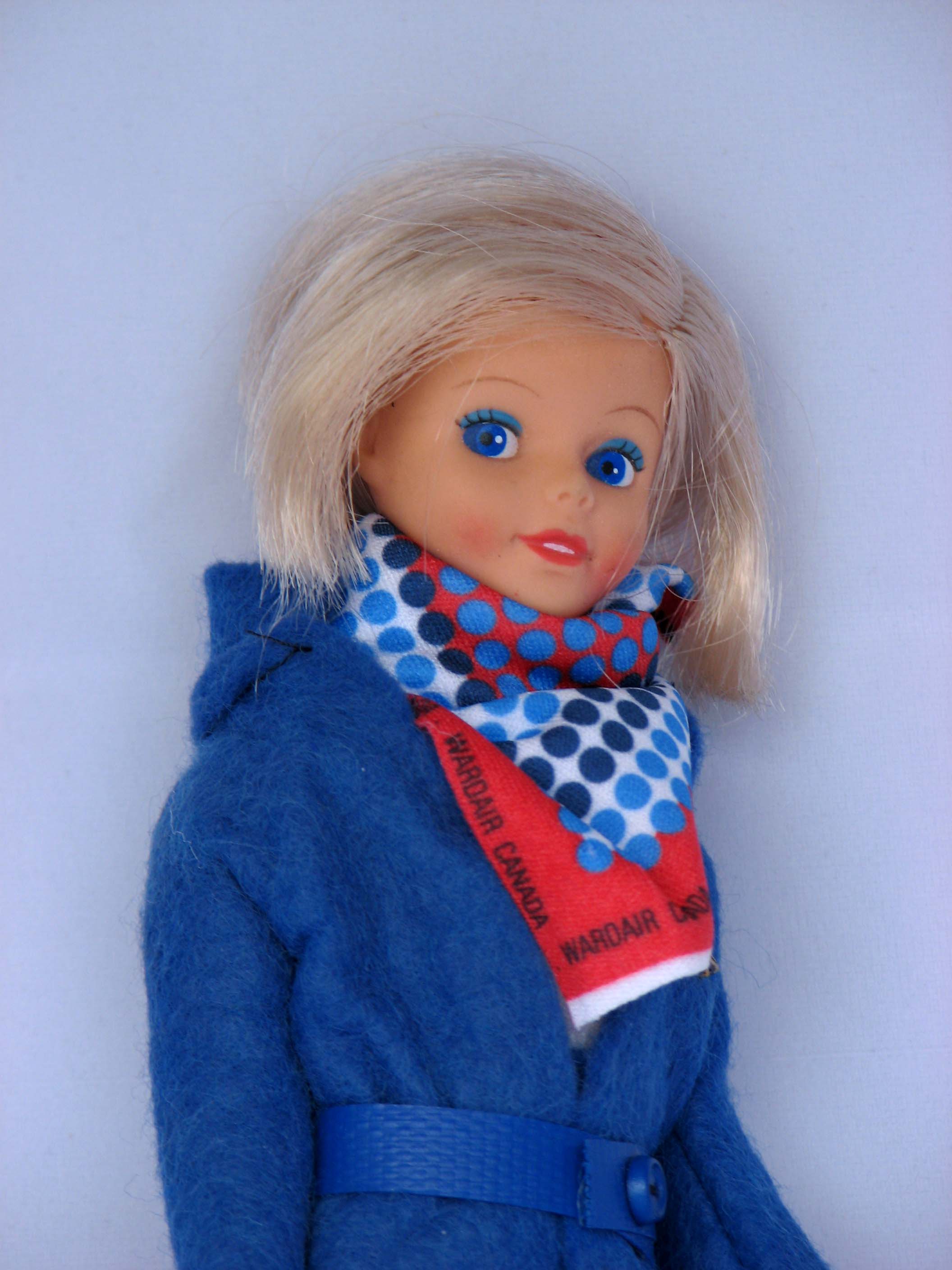 Wardair was founded in 1953 and provided domestic service in Quebec, Manitoba, Ontario, British Columbia and Alberta, as well as international service to Europe, the USA, and several Caribbean and South American countries. On March 31, 1989, the Canadian Transportation Agency approved the sale of Wardair to Canadian Airlines International Sterling Airlines A/S was a low-cost airline with its head office at Copenhagen Airport South in Dragør, Dragør Municipality, Denmark. It was created in September 2005 through the merger of two Danish airlines  Sterling European Airlines and Maersk Air. On 29 October 2008, Sterling filed for bankruptcy and ceased operations. On 4 December 2008, Cimber Air announced that it had purchased Sterling and intended to restore the airline as a separate company, with a gradual expansion throughout Europe. The purchase included Sterling's name.

The Danes! Well it was also a Swedish and Norwegian company, untill it was sold, so more appropiate: the Scandinavians! Scandinavian Airlines or SAS, previously Scandinavian Airlines System, is the flag carrier of Denmark, Norway and Sweden, and the largest airline in Scandinavia.These two dolls I acquired most recently. In the beginning I thought they only made one uniform for each company, but here are again two different ones from SAS.

How naive to think it would be easy to collect them all...

The airline was founded in 1946 as a consortium to pool Det Danske Luftfartselskab's, Svensk Interkontinental Lufttrafik's and Det Norske Luftfartselskap's transatlantic services. European and domestic cooperation started two years later, and in 1951 the airlines merged to create SAS. It is still operating. As you can see on the next ones, they have the same face mould as Amy, Daisy's friend. Maybe a left-over stock that had to be spend?

Anyway she is also very sweet with blond hair.

The red one is from Martinair, the grey one is from the Canadian CP Air. As you can see they don't look to the same side, and the eye colour and eye shadow is different too.

Martinair was founded in 1958, is dutch and still operating.

Martinair Holland N.V., operating as Martinair, is an airline headquartered in the TransPort Building on the grounds of Amsterdam Airport Schiphol in Haarlemmermeer, Netherlands.

CP Air Canadian Pacific Air Lines was a Canadian airline that operated from 1942 to 1987. It operated under the name CP Air from 1968 to 1986. Based at Vancouver International Airport in Richmond, British Columbia. Afterwards it was bought by the Canadian Airlines.

Trans World Airlines (TWA) was one of the largest United States commercial airlines from 1930 until its merger with American Airlines in 2001. She has real brown hair, but the male steward only has painted brown hair. Still a very handsome fellow, I think Daisy could fall for him, given half a chance!

Founded in 1978, Crossair Ltd. Co. for Regional European Air Transport (German: Crossair AG für europäischen Regionalluftverkehr) was a regional airline headquartered on the grounds of EuroAirport Basel-Mulhouse-Freiburg in Saint-Louis, Haut-Rhin, France, near Basel, Switzerland. It became Swiss International Air Lines after taking over most of the assets of Swissair following that airline's bankruptcy in 2002.

All the little stewardesses have a head on a rotating knob, just like the active Daisy, but regular "back and forth" joints at the shoulders and hip.

Delta Air Lines, Inc. (NYSE: DAL) is a major airline based in the United States[9] and headquartered in College Park, Georgia.On October 29, 2008, Delta merged with Northwest Airlines to form the world's largest airline in terms of scheduled passengers carried. And a big surprise, a new Dan-Air doll. She is missing her hat and should have black shoes.

Dan-Air (Dan Air Services Limited) was a leading private, independent airline based in the United Kingdom. A lovely kilted British Caledonian air stewardess. There was also made one in red colours.

British Caledonian (BCal) was a private, British independent airline, operating out of Gatwick Airport in the 1970s and 1980s.

It came into being in November 1970 when the Scottish charter airline Caledonian Airways, at the time Britain's second-largest, wholly privately owned, independent airline, took over British United Airways (BUA). Due to several setbacks it was taken over (merged with) BA in 1987. Here she is, the red girl. Quite lovely and very Scottish. Lets hope she didn't experience too much turbulence on her flights :)

The hat is a funny thing, a round thingy and glued on top of it a piece of black felt fabric as a "dot" on top.